StarDust – Not The Wolves From Little Red….

Featuring: Michael Hodanish
35 years ago Michael Hodanish didn’t know that when he adopted a stray pup that wandered on to his property in Arizona, that it would turn out to be part wolf. He also didn’t know that this small act of kindness would lead to a movement that would save wolfdogs all over the country. This time we found StarDust in the woods of Jackson New Jersey.

I had the absolute pleasure of meeting this kindhearted man who has made it his mission to save as many wolfdogs as he can. It is very apparent how much these animals love and respect him on the farm. Michael finds homes for the wolfdogs, working with the new owners and providing them with as much education that is necessary for the successful transition of a wolfdog into their lives. These animals are being bred all over the country but not all of the wolfdogs end up in safe happy homes. So many are euthanized because of the lack of knowledge or training an owner has for raising wolfdogs. I hope you enjoy the show and find some time to visit and learn about the mission to save wolfdogs in our country. 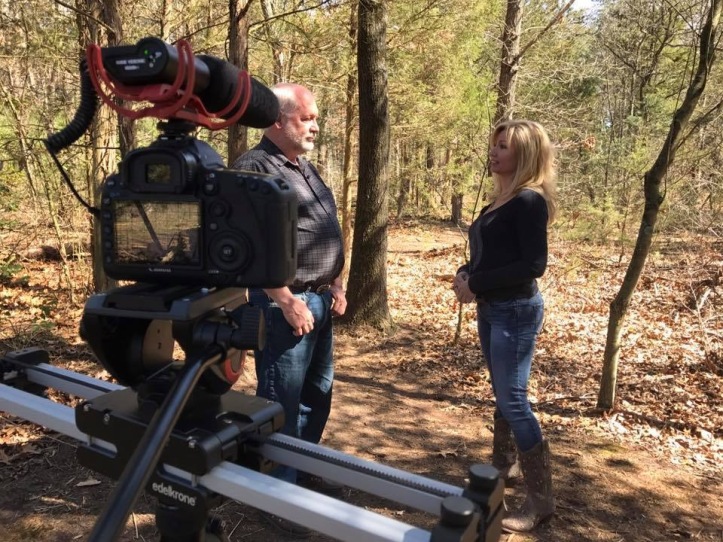 Howling Woods Farm Mission: “Education. It’s to teach people that wolves are not the dangerous animals that we grow up learning about through fairytales like Little Red Riding Hood.” – Michael Hodanish

“I am happy to give families a new family member they could cherish and the fact that people got educated.” – Michael Hodanish

Not The Wolves From Little Red  article written by TaraJean McDonald

TaraJean is a versatile journalist who has produced numerous segments for NJDiscover. She is experienced in Production and Post Production of TV Commercials, Live News Coverage, TV Entertainment Segments and Live Theatrical Events. She studied Communications specializing in Advertising at Fordham University, New York City, but her passion for creativity and expression moved her beyond a Bachelor of Arts degree to where she also studied Theatre and Performance at both Fordham and Roundabout Theatre. Her incandescent spirit took her ultimately to the stage and television in Metropolitan New York as an aspiring actress. Along the way, with a few blinks of an eye, TaraJean was married and raising three young daughters. Next, TaraJean harnessed that spirited energy, becoming editor of Our Town, a Monmouth County newspaper and appearing as a TV host for local Channel 77. The next perfect fit for TaraJean was to channel her unlimited energy in central Jersey working with NJ Discover as TV Host, Reporter, Writer and Producer. She consistently brought a special warmth, caring, insight and humanity to her stories and her reputation flourished with on sight reporting about Hurricane Sandy, homelessness and Tent City, pervasive hunger in New Jersey, and Jersey’s iconic music and film scene. She is the epicenter of what’s happening around the county and state. Almost evolutionary, TaraJean went on to co-host NJ Discover LIVE radio and cable TV and still manages time (quintessential juggler) to be Reporter, SpokesModel, Copywriter, Producer, Journalist and now Sr. Editor for Fashion Haunts Magazine.